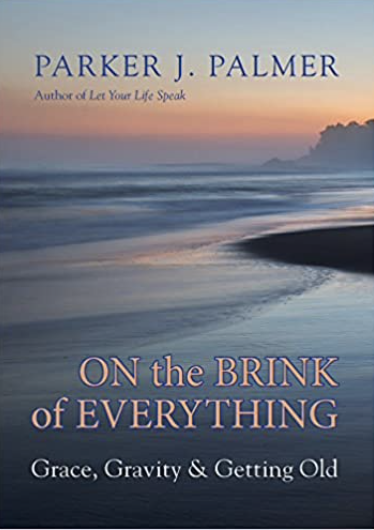 Two BreakOut Room Sessions tonight brought our study of "On the Brink of Everything: Grace, Gravity and Getting Old" to a close. Ken's wisdom was shared with us as an opener: "Live generously and faithfully with hope via your 'thin' places. Share the wisdom you have acquired in your life experiences." Wise words that complement our key theme quote from Parker Palmer: "We need to reframe aging as a passage of discovery and engagement. Not decline and inaction."

Wayne reviewed a key discovery from each of the chapters, the prelude and postlude. In BreakOut I we discussed the impact of Dr. Palmer's book on our lives and in BreakOut II we shared great reads and suggestions for Fall Monday Night Book Study. Sheryl closed with a short prayer. Our session this fall will begin on September 19, 2022. See you there!!

Chapter Six consisted of two essays and a Poem: Fierce with Reality, A Wilderness Pilgrimage and Waving Good-bye from Afar. The video featuring Dr. Palmer's Portraits of Faith focussed on A Time I Doubted my Faith brought us to the close of an excellent companion for the book with Dr. Palmer examining a lifetime of faith to which he likened his faith to being a "fish swimming in the water" where defining water when the creature never knew anything else was difficult.

As usual, there were many topics for consideration for the Break Out session which had an extra amount of time. Pause for Consider, to be released later today, will include a short video featuring Br. David Steindl-Rast speaking on the Benedictine Rule, itself a major theme of Dr. Palmer's Chapter Six. Wayne's themes for the evening drew upon the ideas of Erik Erikson and Palmer and participants willingly shared their special places in nature. Frans Heynen's opening which featured Carl Sagan's "One Blue Dot" video set the tone for a very good evening and the third of the three songs written specifically for our book by Newcomer and Palmer was shared as a closing.

Next week is our concluding evening. Ken will open and Sheryl will close. Book Suggestions for our next study will be discussed as will our format for the fall session. See you there.

"Keep Reaching In: Staying Engaged with your Soul" was another spirit filled read that included three essays and a poem. Wayne raised a number of ideas out of his reading and added his thinking and his stories to major themes throughout. We had lots to share in our BreakOut Rooms, we watched a segment of the video Portraits of Faith with Dr. Palmer talking about being held in the light, we listened to poems by Deb (opening), Rumi (The Guest House), Rilke (Love Poems to God) and to an original piano composition by Michael, dedicated to his dear friend. What a night!!

Reading for next week is Chapter Seven: Where We Go When We Die and the short Postlude poem. See you next Monday night.

Last night's study focussed on "Reaching Out: Staying Engaged with the World" as we considered Parker Palmer's politicial convictions and his view on the value of anger as source of energy. His message of hope was echoed in his conviction that the apparent attack on democracy can be overcome. Wayne's #11 'discovery' quoted Palmer: "Sanctuary is wherever I find safe space to regain my  bearings, reclaim my soul, heal my wounds and return to the world as a wonded healer... I know I need sanctuary if I want to loosen the grip of our culture's violence on me.

Ruth opened with Carrie Newcomer and Parker Palmer's song, "Sanctuary" and Karen's closing reminded us of the importance of radical grace and radical love in our relationships, quoting Maria Shriver. Next week, Session 8, has us looking at "Keep Reaching In: Staying Engaged with Your Soul," Chapter VI. Mike will be opening and Deb closing.

Chapter Four caused us to reflect on our vocations as we were guided through the finding and faithfulness to vocation of Dr. Parker Palmer. Tonight, Frans Heynen opened with two quotes from Chapter Four: "Age itself is no excuse to wade into the shadows. It's a reason to dive deep and take creative risks." As he explored the meaning of risk, taken on behalf of the common good, he guided us to this video: https://www.youtube.com/watch?v=PT-HBl2TVtI Wayne elaborated on 11 discoveries from Chapter IV while Brenda shared with us a video segment in which Palmer answered a question about the concept of God. Closing tonight was provided by Heather McGilvary that concluded with Palmer's Poem: "The Poem I Would Have Writ."

Chapter Three of Dr. P. Palmer's book was filled with so many valuable ideas. Wayne selected thirteen challenges for thought and reflection. If you are following our study, check out the presentation attached to explore the challenges. Video tonight included a segment on Palmer's Spiritual Pathways: "The Medium in which I swim," a segment on Courage and vulnerability from his evening at the Westminster Presbyterian Church in Washington, DC with Sondra Samuels and closed with Carrie Newcomer's song, "Sanctuary" -- one of the three songs written specifically for this book.

Chapter Two of Dr. Parker Palmer's most recent book, "On the Brink of Everything: Grace, Gravity and Getting Old" was the focus of our fourth session of Monday Night Book Study on ZOOM.  Joan opened our session with thoughts, readings and prayer; Jock's poem which evolved from the reading was read; Wayne shared eleven challenges that arose for him in the chapter; Brenda shared segments from two videos, featuring Dr. Palmer and a third video featuring a flash mob dance filmed in an airport in South Africa (2011) concluded our evening. Twenty minutes during the evening were devoted to break out room discussions that dealt with a plethora of topics raised by Chapter II: Young and Old -- The Dance of the Generations.

Next week's reading is Chapter III: Getting Real -- From Illusion to Reality. Plan to join us at 7:00 p.m. on Zoom. Add your name to our mailing list and we will see that you get your invitation. The pdf for 48:04 is attached as a file below.

Tonight, Darlene Heynen opened with the story of Bishop Desmond Tutu's visit to England in 1994 and the Truth and Reconciliation Council Report. It was a story of confession of deed's committed and forgiveness resulting. Thank you, Darlene. Wayne shared with us nine discoveries that he made during the reading of Chapter One. The quotes and video segments selected by Brenda built upon the nine discoveries. Closing featured lyrics by Parker Palmer, sung by Carrie Newcomer -- "The Music Will Live On."

Jock McTavish has offered a poem entitled "What I can see from here." It is attached as a file below along with Mike Grammer's notes for Prelude and Chapter One.

Conversation was lively in our Break Out Rooms as well as during the keynote presentation last night. Wayne shared witih us "Seven Ideas" from his reading of the Prelude with the beginning idea reflecting on the meaning of Prelude as opposed to Prologue or Preface, words more often used to introduce a book. The quotes and videos shared by Brenda picked up on the ideas suggested and we looked at: Poetry -- not Facts, Benefits of Aging, not hunkering down, acceptance and collaboration as a way to deal with death, levity and/or gravity -- a choice, writing as a way of life and finally "aging as a passage of discovery and engagement, not decline and inaction.

Joan opened last night with prayer and a poem while Brenda's closing shared the song "On the Brink of Everything" written and sung by Carrie Newcomer, specifically for the book.

Next week, read Chapter One -- The View from the Brink: What I can see from here.  Have a read and prepare to join us on ZOOM.

How awesome to see everyone last night! We have a fairly long contact list and we had lots of people to share ideas with in Session #1. Ken opened and Joan closed. Check out the pdf attachment of last night's slides and today's reflection, "Pause to Consider."