"Caring for Our Earth"

with Ruth Cross and Margie Oakander 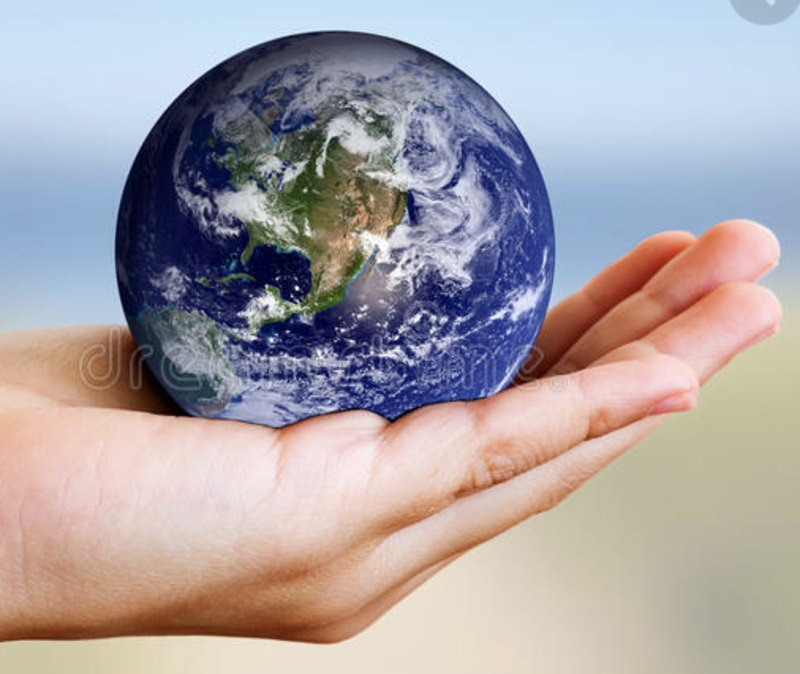 This morning's service was presided over by Ruth Cross with Margie Oakander reflecting on "Caring for our Earth." Janet Clare, Pastoral Care Ministry, offered the "Little Gifts of New Life."

The worship guide can be found on MINISTRIES/WORSHIP as a file attachment.

Caring for the Earth — Margie Oakander

How many of you remember Apollo 8? 1968? I’ll bet a good many of you do, and for those that don’t I bet you would recognize a photo, a very famous photo.

It was the first time a human would leave Earth’s orbit and travel to the far side of the moon. Astronauts Frank Borman, Jim Lovell and Bill Anders were the first people to move far enough away from the earth to be able to see the whole planet and it was Anders who took that famous first photo.

This photo was famous for what you could see – our oceans, clouds, continents even the mountain ranges.

But even more famous for what you could not see – countries, borders, red, blue or orange provinces.  We were one unit, one humanity sitting in space on a breathtakingly beautiful planet.

As Anders said, “We came all this way to explore the Moon and the most important thing is that we discovered the Earth”.

We have gone from the Holocene geological epic, one of the most stable periods of Earth’s history – for 10,000 years the average global temperature did not vary up and down by more than 1 degree Celsius.

So what created this stability in our world?

According to scientists, it boils down to diversity of our living world, the web of life…

From phytoplankton (microscopic plants floating the ocean surface) , vast forests (the boreal in the northern hemisphere  and the equatorial rain forest – harnessing the suns energy and adding oxygen and moisture to the air), huge herds of animals keeping open grasslands rich and fertilized, mangrove swamps and coral reefs providing nurseries for fish, expanses of snow and ice north and south reflecting sunlight back into space and cooling the earth like an air conditioner.

The Holocene was our Garden of Eden and now that has changed to an epic some scientists would dub the Anthropocene, the time of humankind. When human activity has been the dominant influence on climate and the environment. It starts in the 1950’s (the decade of my birth) and as the fossil record from our time will show in the rock layers we leave for a future world, plastics and radioactive isotopes in the geology of our time.

At age 94 and with a career spanning over 70 years David Attenborough, naturalist and filmmaker, recounts all this and much more in his book and accompanying show on Netflix “A Life on Our Planet- A Witness Statement and Vison for the Future” I highly recommend both.

He recounts his amazing life working for the BBC exploring the world and its wild places, he talks about the decline in biodiversity in plants, animals, fish and trees and the effect this is having on global climate conditions and the subsequent effects on quality of life on this planet.

The idea of dropping the GDP as a measure of a countries success and instead looking at a country’s ecological footprint along with elements of human well-being, such as life expectancy, levels of happiness and equality.   it is called the Happy Planet Index.  New Zealand dropped the GDP as its measure of success and prime minister Jacinda Ardern shifted the priorities of her whole country away from pure growth and towards something that reflects people as a priority. What a concept!!

The idea of re wilding, especially the oceans is of supreme importance as fish stocks dwindle and larger fish are driven to the point of extinction. The success of Marine Protected Areas around the world is exciting. For those of you who have been to the Baja of Mexico the Marine Protected area of Cabo Pulmo has brought back marine life by more than 400 % over the last 15 years . Another success story has happened in the south Seas island nation of Palau where they have gone back to the ancient tradition of ‘bul’ or prohibition of fishing as soon as fish stocks on the reefs start to decline, they turn the reef into a no fish zone overnight and don’t lift the ban until the waters are full of fish once again.

Another success story is the humpback whale, since the ban on commercial whaling in 1986 the humpback whales in Antarctica have come back to 93 % of their pre-whaling population according to marine scientist Dr Kristen Thompson. And did you know that a single humpback whale stores around 33 tonnes of CO2, because when it dies naturally it exports the carbon stored in its gigantic body to the deep sea keeping it locked up for centuries.

In the Netherlands, a small country by land mass is actually exporting produce due to novel methods of farming, planting crops in greenhouses, planting in nutrient enriched rainwater and heating the greenhouses with geothermal or wind power.

In Costa Rica uncontrolled logging had wiped out the country’s forest by ¾ in the 1980s. Then the government acted to offer grants to landowners to replant native trees and in just 25 years the forest has returned to cover ½ of the country .

A bit closer to home the concept of rewilding has brought incredible benefits in the form of reintroduction of wolves to Yellowstone National park in 1995. There had been a problem with the deer population due to an absence of predators and the watersheds were being destroyed and with them fish populations and plant diversity.  With the introduction of the wolves the deer moved more frequently, and trees grew back along the streams, helping fish populations and diversity of grass and plants, this assisted bird, beaver, and bison populations, and a balance in rabbit, mice, fox, weasel and hawk numbers. Even the bears benefitted as they scavenged from wolf kills, and so the web of life becomes more complex and positively entwined.

But one of the most exciting concepts for me is the education and empowerment of girls and women. To quote Attenborough “Wherever women have the vote, wherever girls stay in school for longer, wherever women are in charge of their own lives and not dictated to by men, wherever they have access to good healthcare and contraception, wherever they are free to take any job and their aspirations for life are raised, the birth rate falls.  Empowerment brings freedom of choice and when life offers more options for women, their choice is often to have fewer children.’  By simply investing in social and education systems, we may be able to reduce the peak of the human population by more that 2 billion people and bring about the peak population about 50 years earlier than predicted.

When Entrepreneur and philanthropist Bill Gates looks at our Earth this Earth Day, he focuses on public health and climate change, in the end it all comes down to ideas on how to save our beautiful planet from becoming a barren place with no diversity and no wilderness.

looks at the world from a technology point of view. He talks about the ways of getting to net zeros emissions, about strategies like carbon pricing, geothermal, wind and solar power and innovations in nuclear and storage ideas like grid scale batteries to be able to store the energy created. The ideas are utterly amazing. He urges us to do what we can at a personal level, things as simple as installing smart thermostats, innovations in insulation, buying efficient appliances, supporting green energy initiatives, at least trying a plant based burger and becoming vocal and political by writing letters, attending town halls, making calls to elected officials.    More on this later….

Wild spaces and the outdoor places have proven even more important to many of us as we navigate the past 14 months of pandemic. We have taken respite in walks in nature, time outside, watching the birds come back from their winter vacations while we have stayed home. Time outdoors and sunlight are so important for our mental health. I encourage my patients with mental health issues to try to get outside every day even if its for a few minutes, just to breathe in the air and hopefully get a bit of sunshine. We can get so disconnected from nature and it really does help us heal. The idea of “Nature deficit disorder’ was introduced in 2005 by author and journalist Richard Louv in the publication of ‘Last Child in the Woods: Saving our children from Nature – Deficit Disorder’.

It was not meant as a diagnosis but as a description of the human costs of alienation from nature.  Not only does an alienation from nature effect physical health such as childhood obesity and diminished use of the senses, but it also weakens ecological literacy and stewardship of the natural world. He says “What could our lives and our children’s lives be like if our days and nights were as immersed in nature as they are in technology?” A powerful question….

I grew up with parents who camped, fished, and hiked. My Dad Carl was born in Banff and packed horse for Jim Brewster back in the 1920-30’s and he grew up in the mountains, skiing , ski jumping and horseback riding. Some of you might even remember my mom Laura, who was a member of this congregation since St David’s was in the basement of Wm Aberhart school.  When developers wanted to build houses on Nose Hill she picketed with other passionate people along what is now John Laurie Blvd. in order to advocate for a park, which is now Nose Hill Park one of the largest urban parks in North America. She was secretary of the Friends of Nose Hill group for many years as well as secretary of the McDougall Stoney Mission Society, and we spent many days out at Morley, in the shadow of the mountains, at the little church now being restored.

So when we speak up and take action wonderful things can happen.

Flash forward to today, my husband Pat newly retired from a career at SAIT has set his sights on advocacy. Including protesting the re-introduction of coal mining into the Eastern slopes of our Rocky Mountains, impacting the water quality for 1.7 million people in Alberta and beyond. He’s been actively delivering “Save our Parks” signs around Calgary and letter writing and getting educated about environmental issues. I’m proud of him for the knowledge he has gained and shared, as well as the action he is taking.

“Earth day is more than a celebration of the planet it is equally an opportunity for environmental activism and ecological justice for the marginalized and oppressed. Earth Day reminds us of our common humanity and timeless unity with all of creation.”

Personally, Nature feeds my spirit, and nourishes my soul.

It gives me the opportunity to shed the cares of the day, shake off the cloud of the pandemic and the effects I see on coworkers, friends and patients.

I feel closer to God when I’m walking Nose Hill, skiing in the mountains, or hanging out at the Shuswap watching the eagles fly overhead.  I’m eternally grateful for this paradise in which we live, and particularly the gift of living in a country like Canada and the beautiful province of Alberta   where we are so blessed with wild spaces.

I think this Native American proverb really sums up our obligation to this planet “We do not inherit the Earth from our ancestors we borrow it from our children.”

I hope I’ve given you something to reflect upon this Earth Day Service, as you consider how you are playing a role in protecting and nurturing our planet Earth starting right here at home.